LCD and a crazy disk chassis

If you saw my recent post on some preparatory work I'd been doing for the arrival of an LCD status panel for my HP Microserver, it's probably no surprise that there is now a post talking about its arrival :)

Rather than just waste the 5.25" bay behind the LCD, I wanted to try and put some storage in there, particularly since the Microserver's BIOS can be modified to enable full AHCI on the 5th SATA port.

I recently came across the Icy Box IB-RD2121StS, a hilarious piece of hardware. It's the size and shape of a normal 3.5" SATA disk, but the back opens up to take two 2.5" SATA disks. These disks can then be exposed either individually, or as a combined RAID volume (levels 0 or 1). Since I happen to have a couple of 1TB 2.5" disks going spare, this seemed like the perfect option, as well as being so crazy that I couldn't not buy it!

The LCD is a red-on-black pre-made 5.25" bay insert from LCDModKit. It has an LCD2USB controller, which means it's very well supported by projects like lcd4linux and lcdproc. It comes with an internal USB connector (intended to connect directly to a motherboard LCD port), except the Microserver's internal USB port is a regular external Type A port. Fortunately converters are easy to come by.

Something I hadn't properly accounted for in my earlier simulator work is that the real hardware only has space for 8 user-definable characters and I was using way more than that (three of my own custom icons, but lcd4linux's split bars and hollow graphs use custom characters too). Rather than curtail my own custom icons, I chose to stop using hollow graphs, which seems to have worked. 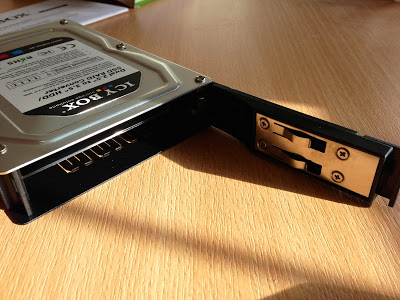 Ta-da! The back opens up 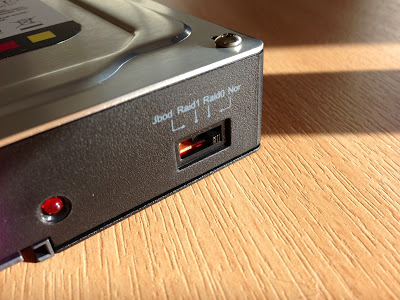 Selector switch for which type of volume/RAID you want

Marrying the Icy Box and the LCD. Only a small amount of metalwork required 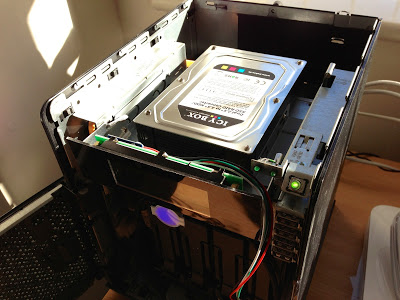 Icy Box and LCD being installed 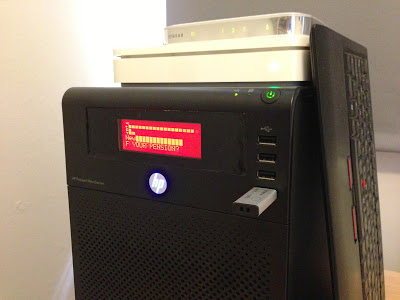